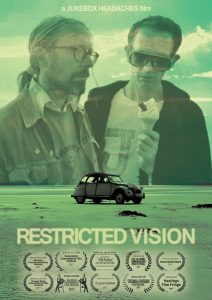 Deep in the Welsh hills, a car is on the move. Its driver, Alan (Jez Leather), appears to be documenting the landscape via a series of polaroids, a road trip made none the simpler by the presence of sometime glam rock frontman Jonny Cola – irritable, unsettled and trapped in an increasingly surreal journey of his own making.
Blackly comic, with an atmosphere hanging between psychological thriller and stylised confessional, Restricted Vision is the debut short film from Jukebox Headaches, the creative partnership between Cola and Leather.
Following a Londoon premiere in 2016 and screenings at various underground festivals in the UK, US, Canada and Morocco, this is the first time the film will be available to watch online. Following the scheduled screening on YouTube Premieres, the film will remain available to view for free on an on-demand basis. A subtitled/captioned version will also be available for viewers with a hearing impairment.
The screening will be followed ar 2245 UK BST with the online premiere of the second Jukebox Headaches film, A Great Fall https://www.youtube.com/watch?v=49THYjSrfq8 .